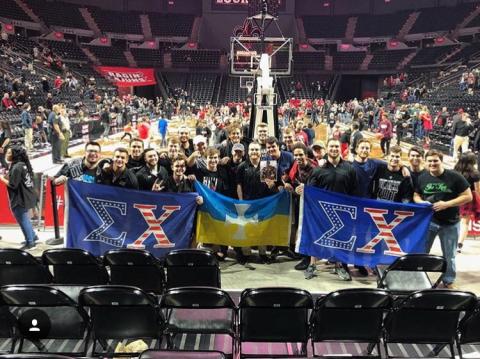 Sigma Chi (ΣΧ) is one of the largest and oldest Greek-letter social fraternities in North America. Since 1855, Sigma Chi has developed values-based leaders committed to the betterment of character, campus and community. Sigma Chi recruits leaders of character to establish a legacy of excellence at the University of Louisiana at Lafayette. Sigma Chi aims to recruit men of different temperaments, talents and convictions from a variety of backgrounds to embark on this unique journey. Specifically, Sigma Chi looks for:

Men of good character...
Students of fair ability...
With ambitious purposes...
Congenial dispositions...
Possessing of good morals...
Having high senses of honor and
A deep sense of personal responsibility

Our chapter was started as Zeta colony on UL Lafayette's campus in the Spring of 2012. After being initiated as the Lambda Psi chapter of Sigma Chi in August of 2014, we have been a 5-star chapter three consecutive years, back-to-back blue Peterson Award recipients, three Legion of Honor winners, two-time Greek cup winner, a Greek Week championship and continue to be among the elite when it comes to academics and campus involvement.